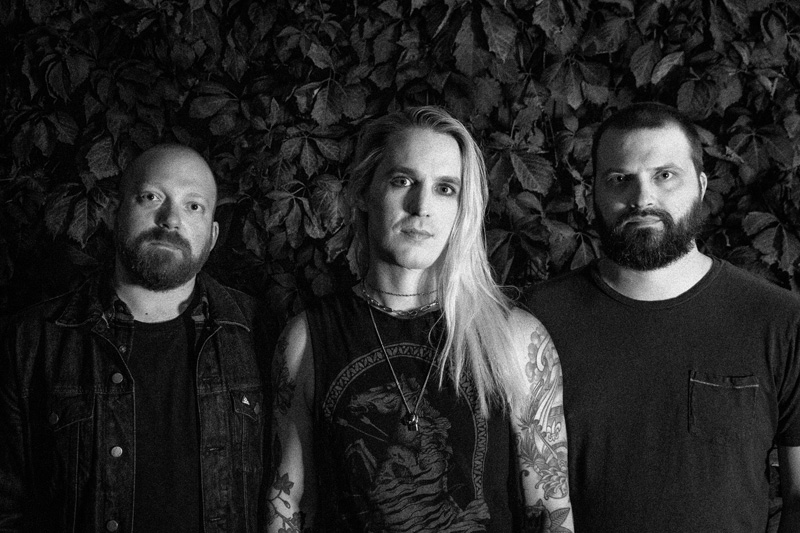 Stream Our Self Titled Debut EP:

“I feel like my songs are how I stare my own anxiety in the face.” This is how Cam Daigle, of the Chicago act Seaxes, describes the band’s claustrophobic, nervy approach to their music, a neurotic, tense, and highly volatile blend of post-punk and noise rock. It’s a fitting description-- where many other bands would choose to elide or make abstract the darker themes of their work, Seaxes chooses to center the discomfort, in the process producing something as cathartic as it is paranoid.

Although Seaxes has only existed in its current form since 2017, the band’s roots go back to over a decade, when Daigle was residing in Florida. Despite having a band name, lyrics, and a few roughly-recorded home demos, the project didn’t coalesce properly until Daigle moved to Chicago and hooked up with drummer Cooper Glodoski, intuitively bonding over a mutual love of perennial dance-punk favorites the Yeah Yeah Yeahs and the deeply textured melodies of Pinback. The two have mostly played as a duo since then-- including during the recording of their debut self-titled EP-- though they have recently added bassist Ron Petzke, of Chicagoland underground favorites such as Weekend Nachos, Bongripper, and CSTVT, to their stable.

It’s appropriate that Seaxes’ debut release dropped in March, right as the COVID-19 pandemic was beginning to take hold; their music perfectly mirrors the overwhelming sense of dread. But, without shrinking back or shying away from the uglier aspects of the human condition, the irrepressibly rabid sound of Seaxes doesn’t just ring deeply true and empathetic, but truly courageous as well.

Drawing from a well of personal experiences and traumas, Daigle’s lyrics and apocalyptic, apoplectic vocal performances walk a razor-thin edge between full-bodied emotional purging and, as Daigle themself puts it, “frustrated parody.” That tragicomic sensibility imbues opener “All the Advantages” with both wit and pathos, and gives the band license to explore more unsettling territory: the desperate, self-sabotaging final gasps of an imploding relationship in “Vertigo”; familial trauma and loss in “Fin”; and, with some help from Haruki Murakami and Daigle’s upbringing in the world of Christian punk rock, ruminations on the ideas of death and the afterlife in “The Well.” The music matches the unconventionality and desperation of the lyrics and vocals in perfect lockstep; Glodoski’s drum work refrains from business or hyperactivity, his patterns accentuating the rhythmic jabs and jerks of the band’s compositions with a finely-honed acuity and loving attention to detail. The synchronicity of the performances contrasts with the aggressively antisocial and alienated nature of the music itself, to breathtaking aesthetic effect. Daigle’s guitar work is the other half of the formula; they proudly play an aluminum guitar through an enormous and crushingly loud Sunn amp, while their frequent use of octave chords and harsh distortion brings to mind a formula that’s one part Steve Albini and one part Drive Like Jehu. With only two people in the studio, Seaxes are able to conjure a sound that’s as oppressive and overwhelming as it is purgative and life-affirming.

Though on a hiatus from performing live during the pandemic, Seaxes are a band that demands attention-- not just because they are unbelievably loud, but because their brand of arch-yet-accessible songwriting naturally complements the anxious and all-too-human nature of the world in which we currently live, and they show no signs of softening their approach. “I don’t know how to write a love song,” confesses Daigle. “This is how I process fears.” And in that regard, Seaxes are immediate, visceral, and vital like few others.


Enjoy! Cross the bridge at your own pace. Slide your heel, let
your hands drift in the crosswinds between the supports and the
cables. Count bricks. Pretend you are walking backwards but
forwards in time, the water moving upward, the sea feeding
the mountains, lifting up through whitewashed boulders,
sending heat back to the sun.